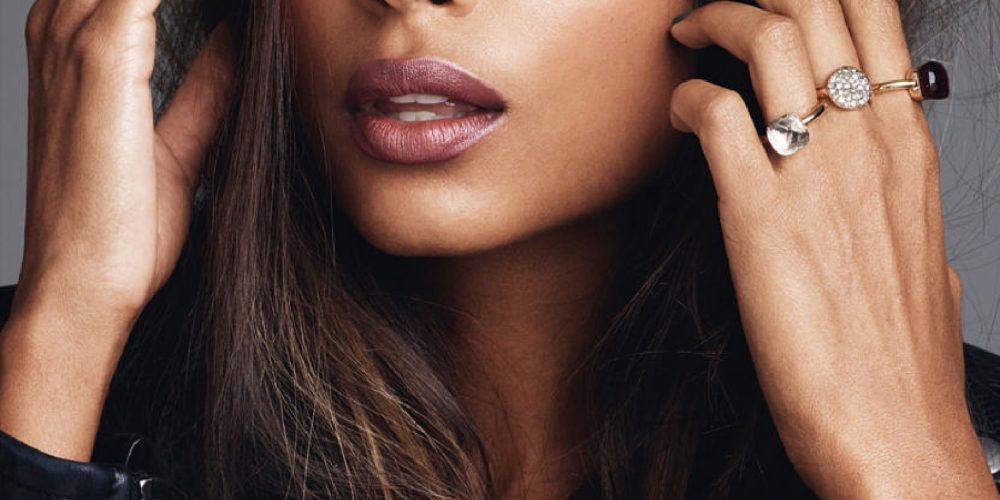 For a new model, the “who’s that girl?” factor is critical. A bulletproof combination of blessed gene pool, fresh-faced cool, and enviable personal style will most certainly get people in the industry talking. But Ghanaian-Australian beauty Frances Aaternir, the 25-year-old face of Balmain Paris Hair Couture, has in fact sparked global conversations.

Stepping out with her boyfriend, Chiwetel Ejiofor, at last fall’s New York City premiere of the actor’s film The Martian, Aaternir set off plenty of camera flashes and got the press instantly speculating. It was, after all, the new couple’s first public appearance, and sheathed in a chic, red streamlined flip-skirt dress, Aaternir kept the press guessing. But when we sat down recently with the bubbly model, it became quickly apparent that the Dannijo Spring 2016 campaign star is hardly shy.

Nor is her career the product of a newfound infatuation. “I always wanted to be a model. I used to read my older sister’s magazines, and I was obsessed with Niki Taylor and Christy Turlington,” Aaternir says. Though she started in the industry at age 19, she wasn’t initially sure whether it was practical. “When I finished school, I thought it was a bit far-fetched and thought, I’ll get a serious job. It seemed like the path you went on, but then I thought, I’ve got to give modeling one good crack because you never know!” She moved from her native Australia to London, where she began posing for the likes of Tom Ford’s eyewear line and Balmain’s new hair-care line.

Soon after relocating to New York’s West Village in September, Aaternir became fast friends with Danielle Snyder of Dannijo, and from there it was only a matter of time before she became the brand’s newest face. “My boyfriend introduced me to Danielle—they’ve been friends for years,” she says, a hard metal ’90s choker from the label glittering from her neck. “I loved their jewelry, and I had been wearing it for months when he was like, ‘Oh, that’s my friend’s line!’ ” The jewelry meshes perfectly with Aaternir’s own wardrobe—she gravitates to Isabel Marant,Rag & Bone, Acne Studios, Re/Done jeans, and, for the red carpet appearances she’s been racking up lately, an influx of edgier pieces. Her approach to big-night style is refreshingly instinctive. “When you get dressed up and you’re going to an event, you like to feel sexy, so I always wear something quite sleek that shows off my legs!”